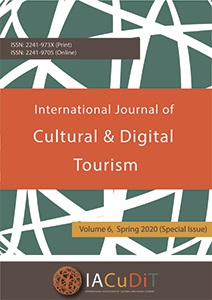 This paper aims to draw attention on the insularity issue faced by many Greek islands and to discuss how the challenges connected with insularity are affected by the Covid19 pandemic and the mobility restrictions measures imposed by the central government. Given that the current tourism pattern of Europe and Greece in particular is going to alter, this paper proposes a new tourism model that could improve the competitive position of the remote Greek islands, while enhancing the total social welfare. This Quality-of-Life Tourism Model (QoLTM) exploits the unique features of the small islands, transforming insularity into a tourist competitive advantage. The proposed QoL tourism model is consistent with the Sustainable Development Goals of the United Nations and aims to improve the well-being of both visitors and island residents.

22 – THE SPATIAL IMPACT OF AIRBNB IN DESTINATION MANAGEMENT: SPOTTING THE DIFFERENCES AMONG THE AEGEAN ISLANDS (PDF)

The phenomenon of sharing economy as a disruptor in tourism industry is already long discussed. Particularly, Airbnb is recording enormous number of listings worldwide, offering alternative lodging proposals to each possible customer profile visiting any destination, from popular city centers till exotic islands. The impact of such business remains a critical issue among tourism stakeholders. Hotels are facing a strong competitor and destination managers are trying to balance the benefits and the costs that Airbnb generates in terms of economy, society and environment. It is evident that sharing economy contributes to regional development with income potentials for property holders, often provoking externalities that affect local residents and destinations’ environment. However, what should be taken under consideration is indeed the type of destination and the degree of its tourism development, that is to say, its life cycle stage. This paper aims to indicate the differences observed in three Aegean Islands and leisure destinations, when it comes to 8 the allocation and density of Airbnb vis-à-vis Hotel beds, as a tool for destination managers to measure the spatial impact of Airbnb and adjust their strategy based on the life cycle stage of each island. The cartographic depiction of the spatial allocation of the beds per accommodation type using a geographic information system (GIS) is adding particular value to the proposed tool.

Smartphones today have evolved into powerful handheld computers in the age of wireless communication. Mobile applications provide services which have reached the point where they are an integral part of users’ lives. Their continuous development, their daily use and their flexibility, lead many sectors of the tourism industry to rely on mobile applications for their promotion and vice versa. These applications can be used even by small or large businesses such as hotels to better serve their customers. The main services of these tourism applications are Location-based Services, context-aware, Augmented Reality Applications and Recommendation Systems. This paper explores the contribution of smartphones, applications and their services to tourism.

Domestic Tourism has not been researched as much as international tourism has. In addition, mountain tourism tends to be associated with skiing and other snow or winter related activities mostly. This field of tourism becomes even less researched when the country is considered a popular sea and sun summer destination where international and domestic tourist arrivals peak during the summer months. The purpose of this paper is to highlight the value of domestic mountain tourism at a popular domestic destination which is primarily accessible by surface means of transport, therefore international tourists find it harder to reach. From a regional perspective, the paper addresses the impact the financial crisis had on domestic tourism length of stay and discusses how these destinations can adapt their tourism offering to become more attractive and competitive. The empirical part of the paper consists of primary data randomly selected by questionnaire during the holiday period between Christmas and New Year, a period where the destination is experiencing high occupancy rates and visitor numbers. The analysis of the data indicates that there are some dominant source markets followed by a high proportion of day visitors who could potentially convert to tourists. The findings of this paper contribute to the literature regarding domestic and mountain destinations, not necessarily linked to snow activities. Conclusions can be applied to other popular domestic destinations not only in Greece but other countries too and applied accordingly for their benefit.

This work aims to illustrate the relationship between cultural tourism and local heritage education by presenting the results of the pilot project “PatriMOIne local – Classes en action”, which involved around one hundred and fifty primary school students from two Alpine municipalities in the Canton of Valais in Switzerland. The project was conceived and implemented by the Institute of Tourism of the University of Applied Sciences and Arts of Western Switzerland (HES-SO), in close collaboration with the School of Pedagogy, the municipalities and the various endogenous territorial resources. This highly formative experience lasted eighteen months and allowed students to immerse themselves in the history and study of the local cultural heritage, in order to acquire new knowledge and skills. During “Heritage Days” students played the role of ambassadors in an authentic and innovative way, explaining to families, communities, and visitors the cultural beauties of their territories, with the support of drawings, videos, and multimedia presentations. By participating in the project, students dedicated their time to an experience of active citizenship, strengthening their sense of belonging to the territory.

Primary semantic condensations through symbols cannot be linguistically shaped as a whole by man. Condensation through images and symbols, which takes a form perceived both mentally and sensually, leads us to the study of the ecclesiastical image and how it affects expression and communication, functioning as an essential part of this condensation. The icon is intertwined with religious worship and religious tourism, as at the same time its creation is a special artistic system. As such, the system has its principles and values. Not looking for photographic resemblance to the original and its representation, this particular visual system records some of its features that shape its existence. The deliberate removal of the temporary and the perishable, but also the avoidance of attributing personal characteristics and emotions to the forms, are decisive elements in the formation of a form of communication. This communication draws its main part from the sacred and speaks of spiritual life, and which also draws from the treasure of myths and leads to religiosity. Also, this communication is ultimately based on icons that survive through their metaphysical truth and which do not need to change form every time to be perceived by the believer-viewer. The similarity observed in the interiority, in the moral-spiritual dimension of the icons is the one that defines them and separates them from any other art form over time.

90 – DEVELOPMENT OF THE DIGITAL MARKETING COMPETENCE OF ADULT LEARNERS FOR SMALL AND MEDIUM-SIZED TOURISM ENTERPRISES (SMTES) IN EUROPE. “DIGITOUR” UNDER THE ERASMUS+ PROGRAM KA204-ADB2C3D1 (PDF)